A UK Sepsis Trust inspirational supporter, Nicola Riach, found an innovative way of raising awareness of sepsis in loving memory of her sister; by organising a series of adverts featuring the symptoms to appear across a fleet of 20 First buses in Aberdeen. Her sister, Shona, was just 50 years old when she lost her life to the condition which kills more than breast, bowel and prostate cancers every year in the UK alone.

Nicola said, “Shona was young, fit and healthy, and was always looking out for her next fitness challenge! She was a proud mum to Aaron and enjoyed her job working as a personal assistant.

Shona first felt unwell on Tuesday 25th of August 2020 whilst at work. The following day, she felt shivery, breathless and was starting to struggle with her mobility. Paracetamol and ibuprofen weren’t helping with the pain, so she decided to call 111, who advised that she most likely had flu or a 24-hour bug, and to go and get a COVID test.

On Thursday she needed help getting to the COVID test centre as she didn’t have the strength to drive herself. Shona was very independent so I knew she must have been feeling bad if she accepted help. Unfortunately I was out the country and did not realise the severity of her illness.

She called the doctor several times that day, and a paramedic team were dispatched. I found out retrospectively the reason for the call-out was suspected COVID or sepsis, and that the paramedics spent over an hour with her. However, despite her symptoms she was deemed not clinically ill enough for hospital admission, and was told to continue taking pain medication and to call again should she deteriorate.

Shona did not sleep that night, and called our mum at 8am on the Friday concerned about the discolouration of her fingers and legs. An ambulance was called and Shona was immediately admitted to hospital, where she died 3 hours later.

After Shona passed away, I found out that her documented symptoms at the time the paramedic team visited on the Thursday were lack of urine output, breathlessness, severe pain, mobility issues, low temperature and blood pressure and signs of cyanosis (blueish discolouration of the skin).

Even if I had known all Shona’s symptoms, I’m not sure I would have recognised she had sepsis. I will do all I can do to continue to raise awareness of sepsis in the hope that they resonate with someone in the future and help save a life. 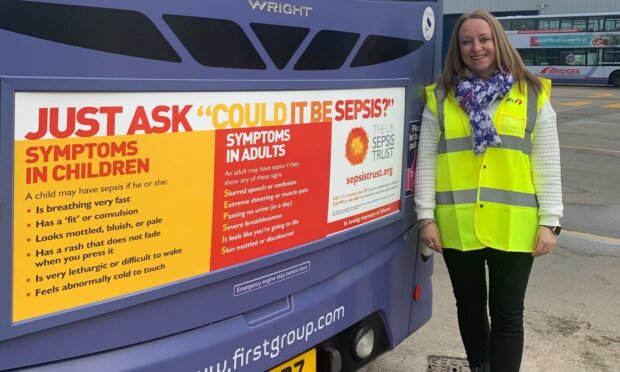 Shona still had a lot of life to live and maybe if she had received treatment sooner, she would have lived to see milestones that have since occurred – Aaron’s 18th birthday, passing his driving test (she had taught him to drive), and starting his apprenticeship. Shona was much loved by many, and we all miss her.”

UKST were delighted to be able to work with Nicola to produce the adverts, and would like to express our sincere gratitude for her continued support of the charity in honour of Shona. As well as passionately raising awareness of sepsis within her community, Nicola ran the 2021 Virtual London Marathon, raising an amazing £6272! We are very lucky to have supporters like her, and look forward to continue working together.